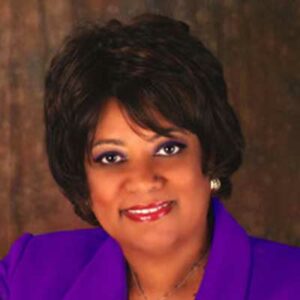 Margaret Thompson Johnson served as the 16th Southern Area Director from 2003-2007. Honoring her theme Setting an Agenda for Success, she envisioned, developed, and implemented the HBCU Scholarship Endowment Initiative. This effort initially established endowments at the 51 historically black colleges and universities located in the Southern Area. With “In Concert for Education,” the Southern Area raised funds to support the HBCU Scholarship Endowment Initiative with a telethon and a concert featuring world-class entertainer, Nancy Wilson. The HBCU initiative was subsequently expanded into a national initiative, which now includes all 105 HBCUs in the United States. Johnson also established “Links Day at the Capitol” with the aim of motivating legislators to eliminate health disparities, which chapters continue to Recognizing the need to improve the health of African Americans in the Southern Area, Johnson established the Healthy People 2010 initiative, and published a monthly health newsletter that chapters could distribute in the communities they serve.

In August 2005, Hurricane Katrina devastated the Gulf Coast of the states of Louisiana and Mississippi. Immediately following Hurricane Katrina’s landfall, Johnson began working to establish a process for the chapters and members of The Links, Incorporated to make donations to the members affected through the Disaster Relief Fund. In October 2005, through the “Journey of Discovery,” Johnson brought the Southern Area Executive Committee to the Mississippi Gulf Coast and New Orleans so that the committee could learn first-hand how The Links, Incorporated, and Links members in particular, could help these areas. Because of Johnson’s efforts, The Links, Incorporated was one of the first organizations to travel to the region to see first-hand the destruction wrought by Hurricane Katrina.

QUOTE: “The legacy of the Links, Incorporated is second to none. This inheritance is shared by all Link sisters everywhere. Our legacy is a phenomenal gift as well as an awesome responsibility. We must always be focused upon what we are, who we are, what we have done and what we can do to better serve. Let us pledge to work together in full alignment with our national officers to ensure that our emerging legacy remains strong and bright.”