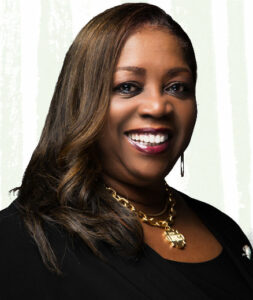 Her theme, Embracing Our Legacy, Fulfilling Our Promise, reflected Herriott’s efforts to build upon our rich legacy of both friendship and service. Under her leadership, members successfully embraced three transformational Signature Initiatives.

One Mission, One Love focused efforts on helping our brothers and sisters across the diaspora. Haitian and African students received personal items, classroom supplies and other life-changing support. Special attention was given to Watford Hill Primary School in Jamaica’s Hanover Parish. Those students faced the closure of their school without significant support. The Southern Area effort resulted in custom uniforms, school supplies, arts education, music education, a computer lab, refurbished bathrooms, a kitchen, meals, family support and more. Additionally, funds raised will build an early education center which will serve children who live in the Watford Hill Community for years to come. Jamaican education officials called the Southern Area effort a “model” for others to emulate.

SA Loves HBCUs focused on the 59 HBCUs in the Southern Area and the students who attend them. All 80 chapters were involved in the effort. Members undertook campus and community programs to address student needs related to nutrition, book stipends, holiday support and more. In 2017 alone, chapters reported more than $100,000 in donations to schools and students as a part of the campaign. To supplement those efforts, the Southern Area awarded $55,000 directly to HBCU students classified as Juniors majoring in STEM subjects. The Southern Area put its love for HBCUs into action at a time when our schools needed us most.

Links Winning the War on HIV secured a $105,000 grant to battle HIV and the stigma surrounding the disease. With Southern states and African Americans experiencing a dramatic rise in HIV diagnoses, our partnership with The Gilead Foundation brought critical education efforts to those most at risk of contracting the disease. Grant awards funded chapter efforts in African American communities, churches and HBCUs. Additionally, the Seminole County Health Department in Central Florida was given $10,000 by Southern Area Links to fund telemedicine efforts which reach patients who can’t or won’t come in to the clinic in person. Southern Area efforts to fight HIV significantly increased awareness among our members and within our communities where it strikes most often.

Herriott also improved administrative effectiveness by including Links of every decade and state to make her Executive Team both diverse and welcoming. She created new positions to address member concerns: the Mind, Body & Spirit Chair addressed spiritual needs and the Disaster Planning & Recovery Chair responded to members affected by flood and storm. Herriott also provided Toolkits for each position so that members would be empowered with knowledge and our organization would be more effective at every level.

Herriott credits the hands, hopes and prayers of the Southern Area’s 4,500 members for their accomplishments and adding to the rich legacy we all share.